Meet the people behind our pilot sites!

We are proud to present the people behind our pilot sites and how they are working within BD4OPEM and what impact they see that unlocking the potential of big data in the energy system can bring to create a more sustainable future!

Several pilot site visits have been conducted since the start of July this year. A delegation began by visiting Electro Celje in Slovenia during 24th – 26th of August, followed by a visit to OEDAS between the 21st – 24th of September in Turkie and then Anell in Spain during the 24st – 26th of October. Interviews were conducted, infrastructure visited, the marketplace tested, and stakeholder engagement conducted. The visits were very insightful and contributed to the development of the marketplace and its services.

Learn about the pilot sites

BD4OPEM DAY was successfully held on the 13th of October where the Marketplace and its services were presented to key stakeholders identified in the stakeholder analysis. The event was held online and engaged an audience of about 55 persons from key stakeholders. 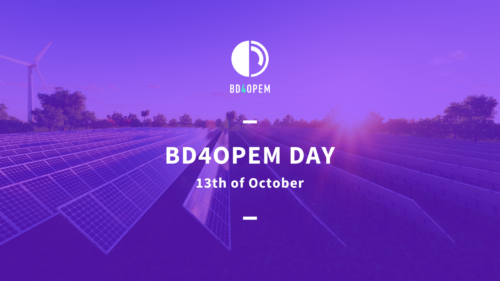 The 2nd project review by the European Commission was successfully held on the 4th of October. The project gathered to present its current status and receive valuable feedback from external reviewers. As the project enters into its final project period the work intensifies and engagement with external actors increases as the results of the project are shared and solutions tested.

The 4th Advisory Board Meeting was held on the 21st of November. The agenda focused on exploitation and business model development. They provided valuable feedback on revenue streams and potential KPI’s in a fruitful and engaging discussion.

This project has received funding from the European Union’s Horizon 2020 Research and Innovation programme under Grant Agreement No 872525.